How fantastic do we look!   Well done to everyone who came in wearing their traditional clothes.  Plenty of food was made and enjoyed by the class!  Yum yum.    Pictures to follow.

We enjoyed our Sports Day over Old Dagenham Park.  Thank you to the parents who came to support us - it is appreciated by staff and children.

We have been learning the trombone this year.  Thank you to the parents who came to our final performance - we have made huge progress this year.  Some of us will be continuing our lessons in Year 6 - we must remember to practise over the holidays.

The whole school joined in with celebrating the Queen's 90th birthday. All children in the school participated in an art competition.  The winners received their own art activity prize.  The winning pieces are on display in the school. 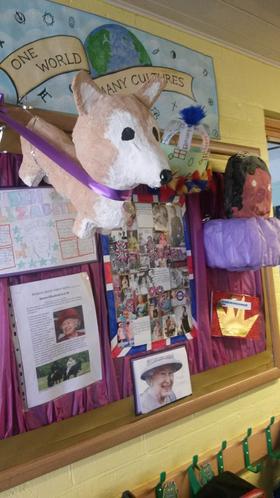 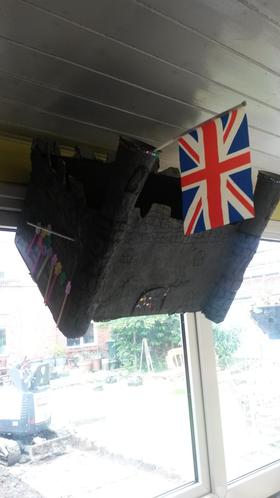 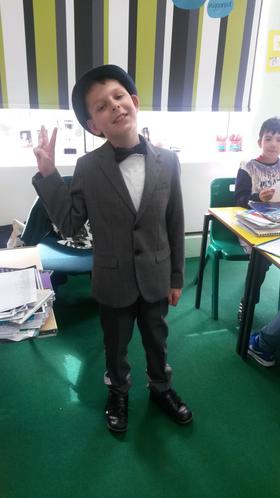 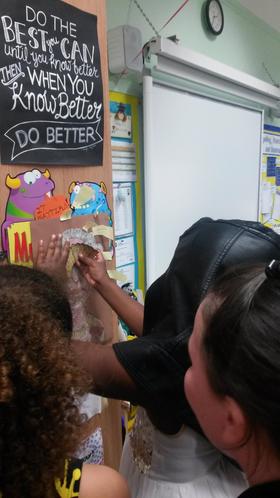 After looking at the ancient Olympic Games, Year 5 learned about the modern Olympic Games.   The class studied the Olympic creed and wrote their own, very mature and inspiring creeds - see below for examples.   These creeds will be carried with them into Year 6 and on permanent display.  The class created their own art work linked to different cultures soon to be participating in the Rio Olympics.

Learning to love yourself is the greatest love of all. Nothing else matters much.....not wealth nor even health..........without this gift: the spiritual capacity to keep zest in living.  This is the creed of creeds.  Goda aged 10.

If you umph because something is hard but you still tried - if you put them together you will triumph!  Philip aged 10.

We are a team, we respect each other.  We take risks of making mistakes and learn from those mistakes.  We try our biggest best.  We celebrate each others' success!  Rokas aged 10.

It doesn't matter who you are, where you live - we are all equal.  You work hard and you get all you deserve.  You should get involved with your learning and have a positive attitude.   Always be the best you can be.  Aminah aged 10.

Shine like the Sun, soar like a bird.  We learn by listening, not judging.  I live a life not by myself but with others and remember - try your best!

You should always try your best, never ever give up, just keep trying and make it easier for yourself by not giving up.  Levi aged 10.

Never give up and push yourself to your greatest limit!  Miguel aged 10.

Even if it's hard don't give up because failing is the first step to success!  And even if you cannot do it, try again because it is the effort that counts.  So don't stop, learn from your mistakes because stopping gets you nowhere! Jeremiah aged 10.

I'll be happy and you live well, where every person owns a beautiful story and by learning about another, I can learn about myself.  Maliha aged 10.

This term Year 5 have been busy learning about the importance of Ancient Greece and its impact on the World today through architecture, stories, language, democracy, the Olympics, art and food!

The children have written their own Greek Myths, produced their own art work and made their own Greek salad - which unsurprisingly did not make it home to parents!  See the pictures below to make your own mind up on how the tasting sessions went.

Year 5 had great fun with the Nursery water tray today.  With support from some of our parents, the class used a variety of containers to estimate and measure capacity.   The class then took this practical "real-life" knowledge and applied it to SATs style questions. 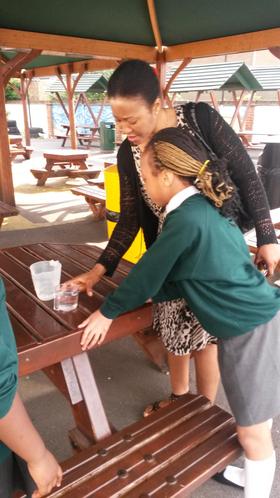 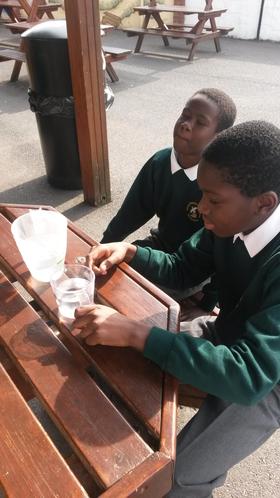 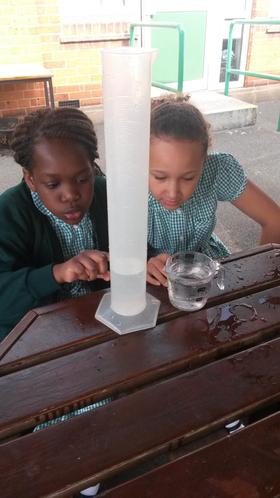 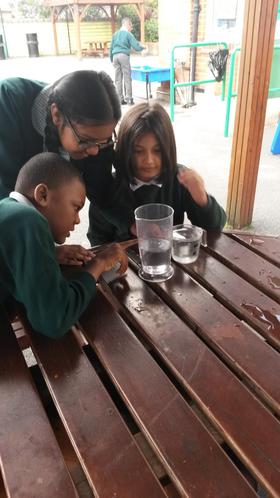 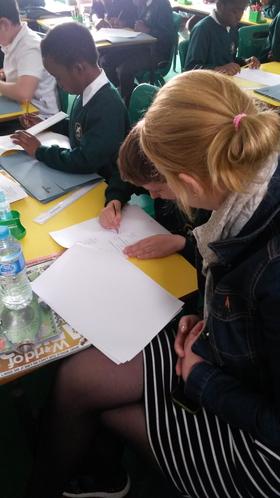 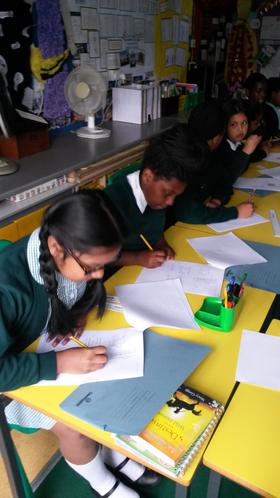 On Wednesday 16th March 2016 Year 5 visited St. Margaret's Church in Barking.  We were shown around the church by Mr Pat Manley, a former Mayor of Barking!  Mr Manley was extremely knowledgeable and told us all about the history of this beautiful church. We asked some really sensible questions and demonstrated respect as well as awe and wonder.  Although it was a short trip we learned so much.  A big thank you to Mr Manley for his time and patience in answering our many questions.
The Curfew Tower
The Last Supper
Sarah was baptised here in 2008!

For Marvellous Maths we have been exploring symmetry.  We created symmetrical images of the Queen which are currently on display in our classroom.  As you can see even our parents enjoyed the art-based activity.    We then progressed onto creating our own symmetrical poses - we really had to think about how we could master the same pose.  Using the I-pads we then investigated symmetry in our environment.    As we are in Year 5, we then moved onto more formal activities such as symmetry within shape.  We developed key skills such as using tracing paper to reflect shapes across the mirror line.

As part of our World Book Day activities we joined afternoon Nursery for a story.  We really enjoyed ourselves - we demonstrated patience and kindness.  We would make great Teachers in the future!

"I chose to be a surgeon because I now know how muscles and organs work and what flesh look like."

Dr Daniel and his Medical Team

Denny the Formula One Engineer

" I would like to be an engineer when I grow up because I could fix the tyres into the car and then win the competition." - Denzel C aged 10

I wonder what has inspired Kenzie to consider Midwifery - could it be the new arrival she is expecting in her family?

Rebekah aged 10  - "I chose to be a surgeon because I like to save people and I would like to experiment with peoples' blood / organs. I also would love to try and use special tools ."

Liliane aged 10 - " When I went to Kidzania I learnt that you have to try something before you say "no" because you never know - it could be something you like!"

My arresting time at Kidzania

Gary with his speeding tickets!

In a recent question we had to explain why we thought one person had a greater chance of picking a certain coloured counter than the other person.  We carried out this actual investigation and came up with some interesting results!

What were the chances of that!   The same coloured counter was picked - amazing!

In order to answer this question correctly we needed to use our fraction knowledge.  We had to say the person with one in four chances (1/4) was more likely to pick the red counter than the person with one in 5 chances (1/5).  When answering justification and reasoning questions we must fully explain our opinions by using the information provided to us in the question.

So far this year we have learned about Forces, The Earth, Sun and Moon and Living Things.

In Science we have been learning about living things - here we are drawing the reproductive parts of a flowering plant.

The Government has announced that children in Year 6 from 2017 will be sitting tests in multiplication tables.  THIS WILL BE YOUR CHILD! Therefore it is vital they know their times tables, not only for this new test but in order to answer word problems involving multiplication, division, fractions and ratio.

If you would like to see examples of Year 5/6 multiplication questions then please do not hesitate to ask Mrs Bell.

In Year 5, the children have been learning about World War II. They have learned about key events during this significant period in British History as well as the impact on children.  Year 5 have shown a keen interest in this subject and were able to visit the Imperial War Museum.

On this visit the class had the opportunity to develop the key skill of analysing artefacts and what they were used for. The class thoroughly enjoyed this trip and as expected demonstrated enthusiasm, inquisitiveness and respect.

A spitfire hanging from the ceiling provided the children with a "wow" moment.
The children enjoyed drawing the tanks and spitfires.
The children had the opportunity to learn about the Allpress family.  A family of ten who survived the war - miraculously all of the sons returned from fighting in the war!

Year 5 only experienced a small section of this museum.  If you are interested in visiting the Imperial War Museum it is open daily and is free!  The closest and most convenient station if travelling from Marsh Green is Southwark tube station which is on the Jubilee Line.  From the station it is only a ten minute walk.  There is a park surrounding the museum, therefore an ideal place for a picnic.

Year 5 at the end of a busy but very rainy day!